Netflix recently released their first horror movie of the year. The film is called The Ritual, which is loosely based on the 2011 novel of the same name by Adam Nevill. I watched the trailer for it last month and it definitely drew me in. Horror movies are my favorite so I’m always open to new ones especially when it looks as if it has the potential to be decent.

Luke, Dom, Phil and Hutch are four college friends that reunite to pay tribute to a friend by taking a trip. The group embarks on a hiking trip in Sweden. One of them gets injured, which slows them down so they mutually decide to take a rest stop until the daylight. As they look for somewhere to rest, they come across a vacant cabin that will accommodate them. As they settle into the cabin, they discover some eerie relics within it as well some odd things surrounding the cabin like a deer cut open and hanging from a tree. Despite everyone being spooked they still decide to spend the night there, but when they wake up they are never the same again. 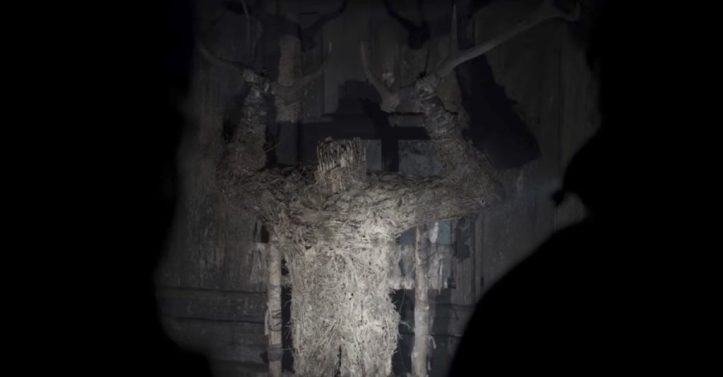 I particularly enjoyed how the writers included Norse mythology and tied it into an evil, sacrificial thing. I think it’s always interesting when there’s a little truth to the creepiness. It was mentioned in the film that the evil that is being worshipped is a “jötunn” which is basically Swedish for a God or entity. One of the people that lived in the village where Luke and Dom were held captive explains that she and the people there worship a bastard god-spawn of Loki, but they cannot utter his name. She also says that from worshipping and making sacrifices they are granted an extended life.

The film initially gave me a Hostel feel in the beginning because the characters’ naiveness felt so familiar. They literally went into the woods with an old fashioned compass and thought that they would make it to the lodge within in a day, but they were already somewhat lost along with the fact that had no clue about the area they were in.

The group’s trip into the wilderness made them face their fears especially the character, Luke. Luke was struggling with his guilt for not intervening in a robbery that could have prevented his late friend’s death. Throughout the duration of the film, he had dreams about it, but I believe that it was the entity preying on his weakness.

The ending disappointed me. As the movie was wrapping up the smoke cleared and it was becoming laughable rather than giving off its initial creepiness. I felt like the ending had much more potential and could have went in any direction, but instead it was just like ehh. I will still say the movie is worth watching. It’s interesting and refreshing to have a new horror movie in Netflix’s catalogue.

Check out the trailer below